skip to main | skip to sidebar

Due to an error in the Blogger upgrade several months ago, I couldn't log into this blog anymore to update or even to leave a forwarding address. Suddenly, as if by magic, I can log in again and I've debated about what to do. Should I delete this blog and move any good stuff over to the new one? I would lose all comments (not like there are hundreds, but still, there's a few good ones). OR, should I transfer stuff from the new blog over to this one? Again, I would lose comments, though not as many because I lost readership when I couldn't leave a message as to where I had gone and why I wasn't blogging. I like the format of the new blog better, so I think I'll be inclined to keep it until I'm ready to get my very own piece of virtual real estate.

While I think about what to do, if you've stumbled here, you can find my new blog at www.velvetverbosity2.blogspot.com. Come and visit! 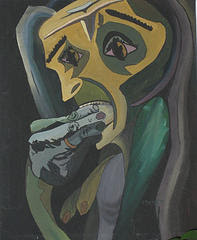 The room was white peeling plaster
and yellowed wallpaper
that slumped and separated
from the walls
in great bubbles.
We sat
five of us to a sagging bed
passing around bottles of cheap beer.
A lightbub shone white and hot
over our bobbing heads --
Teenage angst,
lust and anger burned inside our skulls
making its way out our mouths
and down
to our loins
filling our narrow eyes with electricity
that traveled invisible across unseen wires
plugging straight
into our impoverished swollen hearts.

We were starved for love then --
like the little brown children
on the television with their staring eyes and flies
on their faces;
their distended bellies pushing out
as they stood in the dust.

We gorged ourselves on love affairs
thrown at our feet
like bags of rice, but we could not
absorb what was good in it.
It ran through us like dirty water
and we could only keep feeding --
howling at night in our beds
at the hunger pains burning. 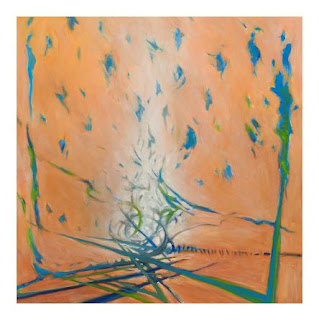 This first morning of 2007 I was met with not one single new email. I thought it strange and made sure my account was working properly. After several different types of tests, I have determined that Smith had me on an automatic shut off schedule. I no longer have a Smith College email address. Woe is me.

It's not even the hassle of setting up a new email, or sending out one gigantic bulk email to everyone with a new address that has me upset. It's the change. It is the passing of something entirely symbolic of a time in my life that is now over.

Those who know me might mistakenly think that I am a woman who embraces, and perhaps even covets change. A quick inventory of my life would reveal many moves, many risks taken, many new paths courageously forged and a seeming willingness to leap over the edge again and again.

It is partly true. I have never been afflicted with that condition known as "fear of change". At least not on the level that it prevents me from making new plans, or uprooting my life and everything I know in order to pursue a goal. But the whole truth is that once I am done riding the wave of change, and find myself washed up on a new shore, I lay there shivering and moaning for days. I have to grieve what is past, and I feel the need to grieve fully over every path ended.

And so, this morning when the realization hit me that I had actually been finally and completely severed from Smith as a current student, I felt the grief rise up from my belly and wrap itself loosely around my throat. I expect three days of brooding, brow-furrowing type behavior from myself before I can get both feet fully onto the next path. I wonder if I was moody and pensive in those first days after the exodus from the womb? 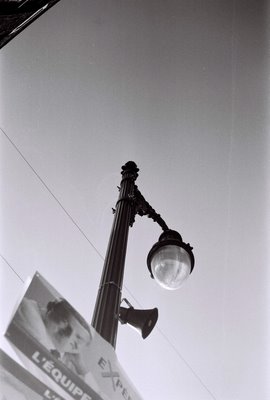 Just what have I been up to?

* Buying a car. This was a painful yet exhilerating process. After some false leads, and dashed hopes, I have found her. A creamy Subaru Outback. She is a sleek and sexy beast; capable, comfortable, powerful and delightful. If this car were a person, she would be a lean, robust woman, adept at everything she put her hand to, sensuous, mysterious, powerful, precise and quietly intelligent. What name should I give her?

* Searching for artwork for the program cover of the Christmas Vespers concert at Smith College. I spent a delicious afternoon in the Mortimer Rare Book Room, paging through the hefty volume of a German history of the world published in 1493 (the title escapes me now, and I kick myself for not writing it down) filled with woodblock prints of kings, queens, and saints being murdered. I'm not entirely sure why I was directed to this book when I described what I was looking for (Victorian angels perhaps), but surely the blank expressions on both murderers' and victims faces' was not it. No matter, it was a pleasure just to lay my hands on a piece of work that spends it's time locked away behind protective glass.

* Thinking. Of course this is not unusual, for me, or anyone else. It is the intensity of it that has kept me from the keyboard. 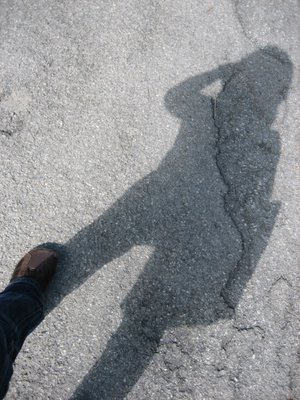 I know, where the hell have I been?

I've seen and encountered many interesting things and people over the last couple of weeks, and now that I am finally here in front of my computer, I can't recall any of them.

Where Did She Come From? 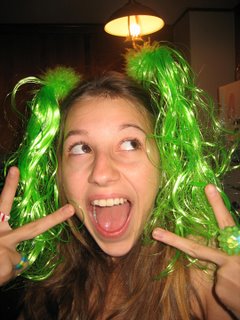 I gave birth, almost fourteen years ago, to an unbelievable life force. Loud, forceful, funny, outgoing, athletic, brave-as-all-hell, thoughtful, organized, and stunningly beautiful. Everything I'm not. How does that happen?
Today, she and I were driving around looking for a parking spot, and in one of the few parking lots, there was a car just sitting, idling. The first time we drove by, we looked in and took note that the occupants of the car were a young, good-looking couple. As I drove past the car several minutes later, for the second time, I wondered aloud what they were doing just sitting there. It was annoying me for no particular reason. I thought maybe they knew something I didn't, like that in two minutes half the stuffed parking lot would clear out, and they were just patiently waiting for some prime downtown parkage.


After I grumbled to myself, "what the heck are they doing?", my daughter promptly replied, "They're being hot...just give them a minute".

Out of the mouths of babes...

A Good Laugh Does the Body Good 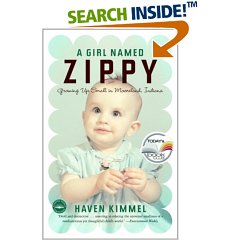 This from "A Girl Named Zippy", a wonderfully funny and touching memoir about growing up in Mooreland, Indiana. I've laughed right out loud at least 10 times reading this, causing my daughter to sigh over her homework, and then demand that I tell her what is soooo funny.

"I didn't believe in God, had not ever, as far as I could remember, believed in God, and yet I was reluctant to formulate the thought too clearly, not to mention speak it aloud, for fear that poor God would hear it and get His feelings hurt.

I believed that the baby Jesus had gotten born, and that was all lovely. Christmas was my favorite time of the year, in part because of the excellent speech, "Fear not: I bring you good tidings of great joy..." and because of the song "The Little Drummer Boy." Anything that involved such persistent percussion was undoubtedly both religious and true.

After he ceased to be a baby, Jesus held little interest for me, until he reached the age where he sat for the portrait that hung above the swinging doors in the vestibule of the Mooreland Friends Church. In the painting, which glowed from a fluorescent light bulb hung beneath it, the Big Jesus looks pensive and honey-eyed. His shoulder-length, light-brown hair is as clean and shiny as corn silk, and he has a beautiful tan. He is way better looking than either Glen Campbell or Engelbert Humperdinck.

I wanted him to be my boyfriend. My feelings about Jesus didn't alarm me at all, because it appeared that everyone around me was flat-out in love with him, and who wouldn't be? He was good with animals, he loved his mother, and he wasn't afraid of blind people. I didn't buy the bit about his terrible death and resurrection for a minute. I knew, beyond and room for doubt, that nothing in this world is both alive and dead. And this was the thing I most wanted to say in church: if you want him to be alive, you've got to stop hanging him on that cross. But it appeared that the cross was what the people of Mooreland valued above all else--more than his life, more than the sweet way he carried lambs on his shoulders in the pictures on the fans furnished by Main & Frame Funeral Homes--the cross, and the way he got sucked up into heaven to be with the Father who killed him. It was such and objectionable story that I decided to skip it. I decided that Jesus was alive, just as people claimed, and that he lived in the trees around my house. He had picked me out personally, and was following me around, watching my every move. Sometimes I lay out in the backyard with my blue tape recorder, just holding the microphone up to t the sky. I figured if Jesus was ever going to break his long silence, it would be on a warm, breezy day in Mooreland, with his best girl waiting patiently in the grass. The tapes I made were very peculiar and very boring. The only voice heard is that of my dad, telling me he's waiting inside with the Campho-Phenique and the Chig-a-Rid. No one ever tried to discourage me; it is written in our very bones, as a people, that true religion requires sacrifice." 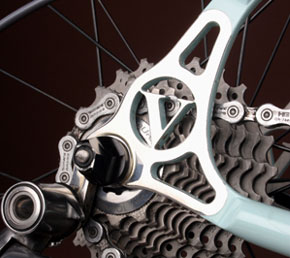 Today, I crossed the field where the local Smithie girls play Ultimate Frisbee, noticing my feet getting kind of damp from the wet grass. As I stepped onto the sidewalk, my world abrubtly converged with a stranger's.

She (the stranger) was riding along on her bicycle in all her short-haired, salvation army attired, messenger bag shouldered glory when, suddenly, some unnamed joy seized upon her so that just before we would enter each other's visual fields, she belted forth a loud whoop...a hearty "WooHoooooooo!", that she let arc out of her young, proud mouth.

For the briefest of moments, we were face to face, her head turned to greet me as I stepped out from behind the fence, and our eyes met and lit up, and our faces beamed acknowledging smiles at what had just been shared. Then she was gone, my bicycle messenger of joy.

(Image from www.vanillabicycles.com because this post is about the convergence of strangers, and bicycles and joy, and in my humble opinion Vanilla Bicycles are all about joy in the form of bicycles, and I suppose I could fit strangers in there too if I thought about it.)

Pay No Attention to the Woman at the Keyboard

Some Things Are Important

that girl can WRITE

Lemme Hook you Up